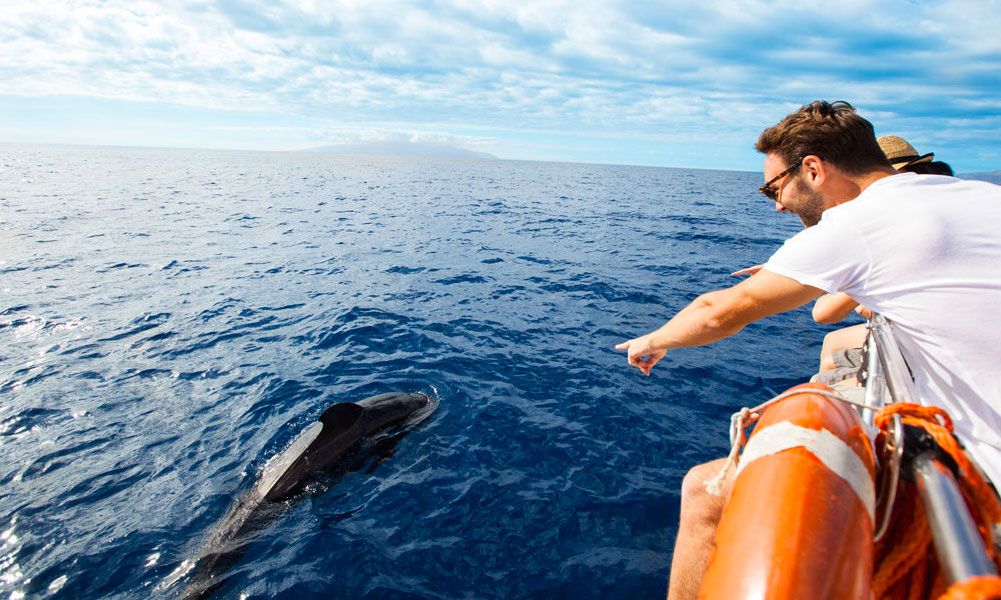 The next time you visit Playa de Las Americas, leave the swimming pool and sun lounger behind for the day and go whale watching in Tenerife with White Tenerife Sea Charter.

Sometimes the best way to see an island such as Tenerife is offshore, from the Atlantic ocean which surrounds the Canary Islands. We set off dolphin and whale watching in Tenerife with the White Tenerife crew. Located in Puerto Colon, they are only a 20 minute walk along the sea front promenade from Playa de Las Americas resort. The morning was beautiful, the sky was clear blue and the sun was starting to warm the stones and at 9.30 in the morning, it was a nice temperature of 20 degrees. 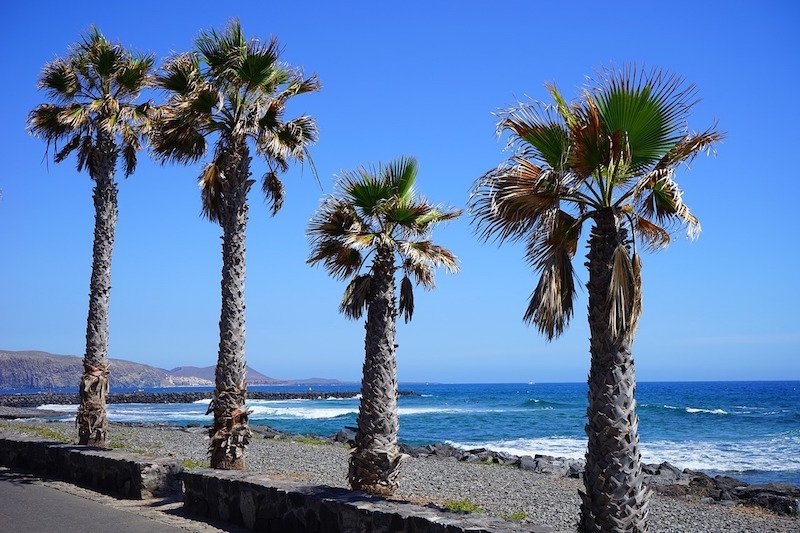 Puerto Colon is a compact leisure sailing marina, on the Adeje side of  Las Americas. Loredana, the company’s office manager in the port, gave us a warm welcome and sent us to ‘Pier 0’, where our skipper, Paco, was readying the yacht to set out to sea. The White Tenerife yachts are state of the art and take up to eleven passengers, which makes for a very personalised experience. You are not meant to wear footwear on wooden decked ships as it can damage the wood, so we all left our shoes in a crate onshore. Our fellow passengers were very pleasant, a family from the Netherlands and a young couple from London on their first holiday together!

The ocean around Tenerife reaches huge depths very close to shore and this is attractive to pilot whales (‘calderon tropical’ in Spanish, of the orca family) and so we set out to a spot 2o3 nautical miles out in to the Atlantic where the sea reaches a depth of 1000 metres. This is where the whales feed on giant squid (up to 6 metres long).

After about half an hour we located a school of six whales which Paco was familiar with. The group consists of five males and one female. The matriarch “grandmother’, is the leader of the school and she leads the male whales. The whales relax during the day after feeding at night, so they were resting just under the surface of the waves with their dorsal fins emerging from the water (the males have a more pointed fin while the females have a more rounded fin).

It was exciting to see them as close up as two or three metres while Paco skilfully brought the yacht up alongside them (they will take fright if they are approached from behind or from the front) and after cutting out the engine for a few minutes, the whales let themselves float towards us. Every couple of minutes they surface to breathe through their blowholes and the whooshing sound is the only one you can hear against the sound of the waves. These whales measure up to seven metres long. Paco pointed out the visible scars along the length of their bodies sustained from the giant squid tentacles of the squid defending themselves from the whales.

After enjoying the presence of these majestic animals our yacht approached the coast in search of dolphins which frequent the area in pursuit of fish. Unlike the pilot whales which stay in the place they feed, dolphins travel around in pursuit of fish so it is harder to find them. You will only see dolphins if there are fish which have come in during the previous night for them to hunt and we were privileged to come across twelve bottle nosed dolphins who put on a playful display of jumps and somersaults for us. It must be true that dolphins are sociable because it felt like they were communicating with us and they were certainly aware of our presence. It was exhilarating to watch them.

Our whale watching in Tenerife trip was all about seeing the animals, but White Tenerife also drop anchor close to the coastline for those who want to jump into the sea for a few minutes. They supply a salad roll and a beer during that stop and you step back on to terra firma three hours after leaving the harbour. We loved the outing and felt a deeper appreciation of the island in a more three dimensional way than before.

This is a guest post by Frances Ryan, an Irish girl who is a regular visitor to Tenerife. For more information on dolphin or whale watching in Tenerife, visit TenerifeSeaCharter.com

Go off the beaten track in Tenerife and Visit Garachico

No surprise to see Keem Bay listed by @lonelyplane

I tried something new today and recorded one of my

Feeling very lucky to have my family around me tod

Forever dreaming of being back here some day🏝 M

Dreaming of hotel stays again, roll on the summer