Perched on five miles of sandy beach, with award winning cuisine and a host of activities for children, is Kelly’s the best family hotel in Ireland?

For years I have heard friends boast of Kelly’s fine food and fantastic kids facilities. The Irish Independent’s reader awards named it as their favourite place to stay for 2018 and it was voted the most family friendly hotel in Ireland in last years Gold Medal Awards. These are on top of a plethora of other awards that Kelly’s has received for as long as I care to remember! I was interested to see what all the fuss was about, so when Wexford Tourism invited us to stay I jumped at the chance.

Waiting in line to check-in was bizarre. I overheard two separate couples rebook for the following year. There was no question of cost, they were confirming their booking for the same time, a year later. I asked the receptionist if this was normal and she said she has seen four generations of families staying at Kelly’s since she started working there, a startling statistic. I don’t think I have ever holidayed in a place that my parents stayed…. I found this fascinating and couldn’t help but notice that throughout the hotel there were multi generational families holidaying together. Kelly’s is an anomaly as it manages to cater superbly for children but also for parents and even grandparents! It is not only the clientele that come back year after year. It was heartwarming to see so many long serving members of staff, who recognised guests from previous visits, a rarity in the hospitality sector these days. 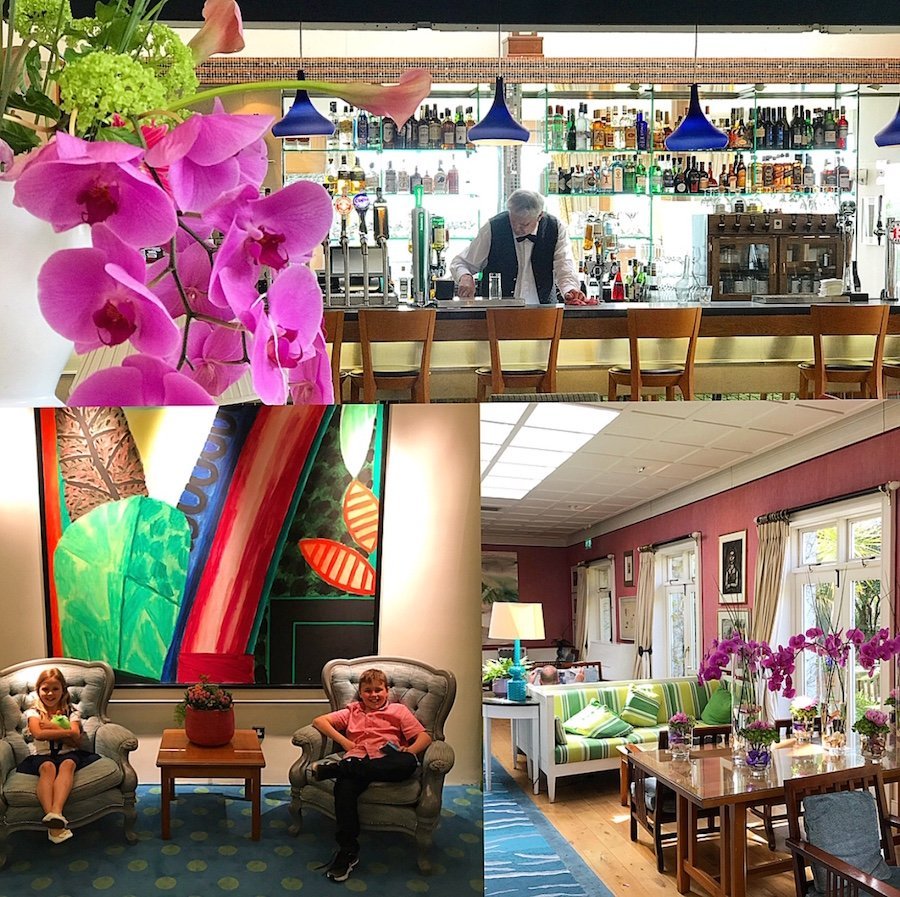 There is entertainment around the clock. It starts after breakfast when the kids club opens at 930am. Kelly’s have a ‘Pirates Club’ for kids aged 4 and over.  There are arts and crafts, drama and dress up, musical games, painting, pool games and much more taking place throughout the day. The ‘Starfish Club’ caters for younger children from 8.30 am – 5.00pm, however a fee of €3.00 per child per hour applies. Parents are free to spend a day at the beach, play a round of golf at the nearby championship course, or relax in the multi award-winning spa. A word of warning, prebook your spa treatments, the spa looked seriously impressive! As it was our first time to visit,  I didn’t realise how popular it was, it was booked out for our entire stay. 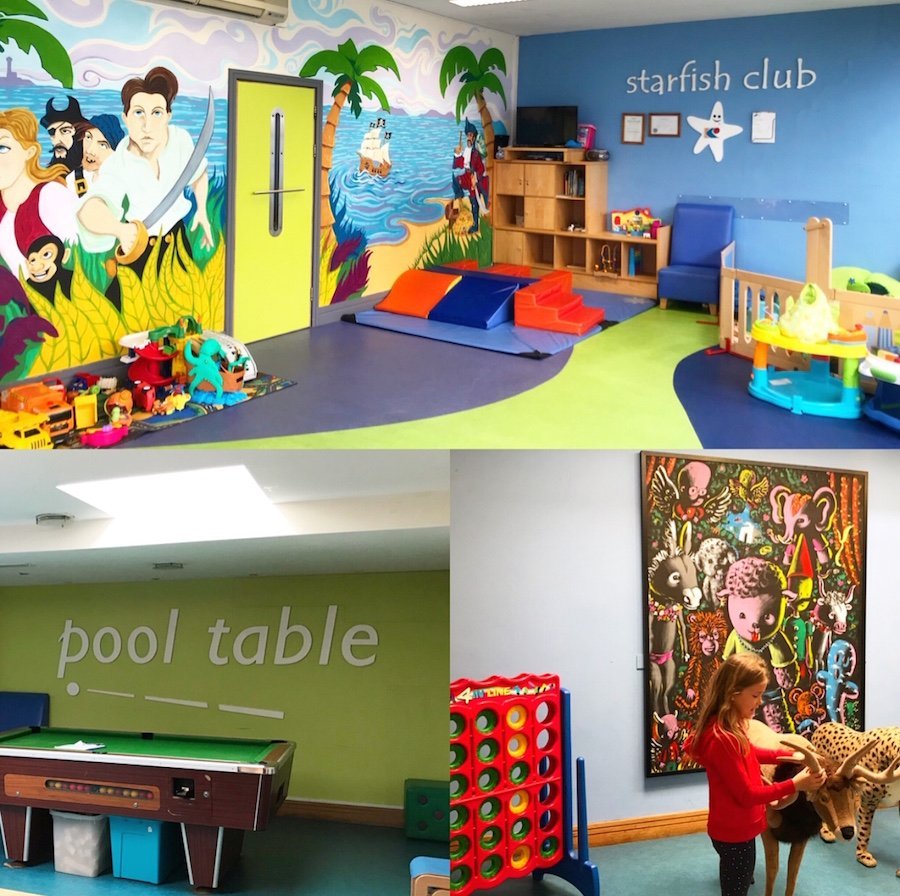 Lunch is served from 12.30pm. Families dine together and enjoy an array of delicious hot and cold options from the buffet. I am not normally a buffet fan, but we ate here on our last day and it was excellent. The selection of salads was superb, not to mention desserts! They even had a selection of homemade ice cream with cones for the kids. If you don’t fancy buffet dining, you can also choose to opt for waiter service in Beaches, the à la carte restaurant, for breakfast or lunch. 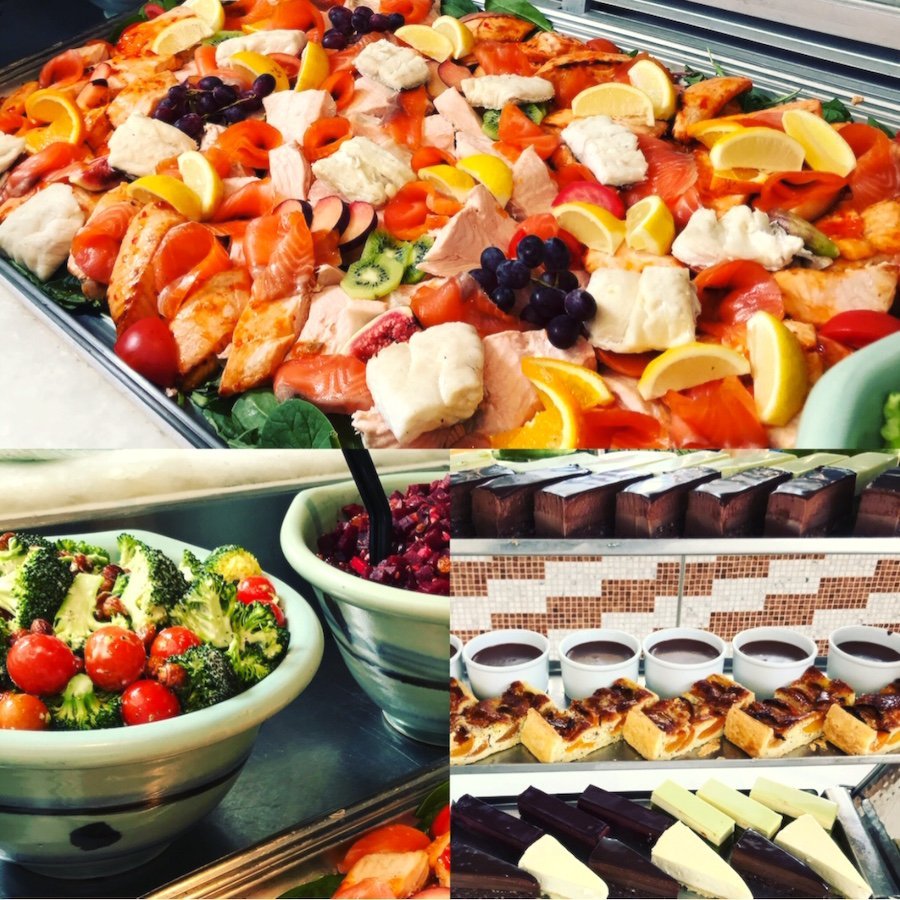 Dinner is a whole different ballgame. After an afternoon full of activities, children are encouraged to dine at the ‘kids buffet’ at 5.30pm. Personally, I found this a tad early! We happened to be out all day so this wasn’t an option for us anyway, but the idea is that kids dine separately with their new found friends. Dinner is followed by a kids disco and then back to the kids club for a movie. There is complimentary child-minding for all children from 7pm – 9pm so parents can enjoy a ‘date night’.

I spoke to a few families while I was there and they loved this arrangement. In fact this was one of the main reasons they return to Kelly’s year after year. They get to enjoy fine dining in Beaches alone, while the kids watch a movie. Kelly’s also have a remote intercom system so when you put the kids to bed, you can leave the phone off the hook and dial in to make sure there is no one awake. You can also hire staff babysitters ( €10 per hour), if you have young children or are not comfortable with this arrangement. I doubt this would be used much in international hotel chains, but Kelly’s has been a family run hotel for over 100 years. Originally opened as a tea rooms in 1895, Kelly’s has been passed from generation to generation and has always remained a family run hotel. Kelly’s is now run by the fourth generation Bill Kelly and his wife Isabelle. Isabelle happens to be the daughter of leading French wine-makers from Chateauneuf-du-Pape – so no wonder the wine list is so good! Laura Kelly, the fifth generation Kelly has also taken the helm beside her father. Like her father and grandfather, she studied in the famous Hotel Management school of Switzerland and has since worked in top class family resorts around the world, including Club Med. The reason I mention this is because Kelly’s has a Mediterranean resort feel to it. It is not like a typical Irish hotel. Most people book the full board package, which includes all meals, even afternoon tea! Kelly’s reminded me of an all-inclusive family resort in Spain, I don’t think I have seen anything like it anywhere else in Ireland. 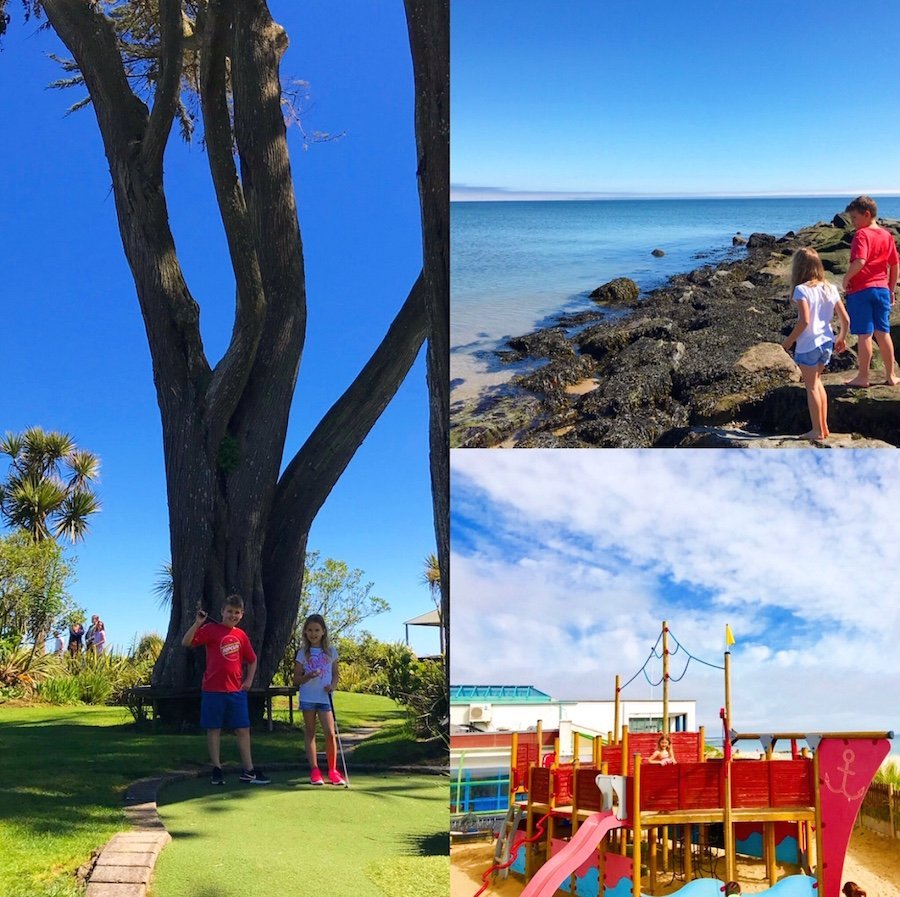 We ate in Beaches twice, albeit with the kids! For a large hotel restaurant, Kelly’s not only manage to serve delicious food but the atmosphere felt more like a local restaurant than a large hotel dining room. It should be noted that young children are not allowed to dine in Beaches. The menu actually states ‘adults only’ but when I had a mild panic attack, I was told it was not enforced for older kids. Looking around the restaurant I don’t think there was anyone under six. If you want to dine with young children you can reserve a table in the bar area and enjoy the Beaches menu there.  I thought this a little autocratic initially, but it works! 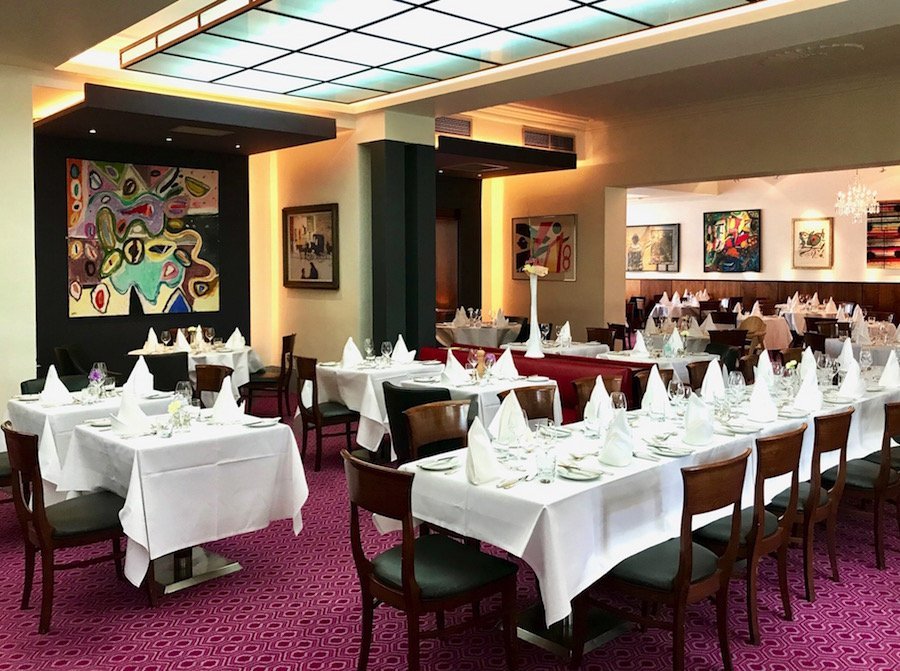 The food in Kelly’s is superb. Whether you dine at the buffet or in Beaches, for breakfast, lunch and dinner, you are guaranteed delicious meals and super service. In Beaches I enjoyed a tasty goats cheese salad starter and Cormac, the crab salad. There was no separate kids menu but there were ample dishes for kids to enjoy. However if you have fussy eaters, they are only too happy to provide children’s food off menu. The fillet of beef was perfectly cooked, as was the scallops and black pudding. The desserts were delicious too. After one day in Kelly’s I understood why people were so obsessed with the food – it really is that good! Mr Kelly played the perfect host, checking in with all guests asking about their day and if everything is ok with their meal. 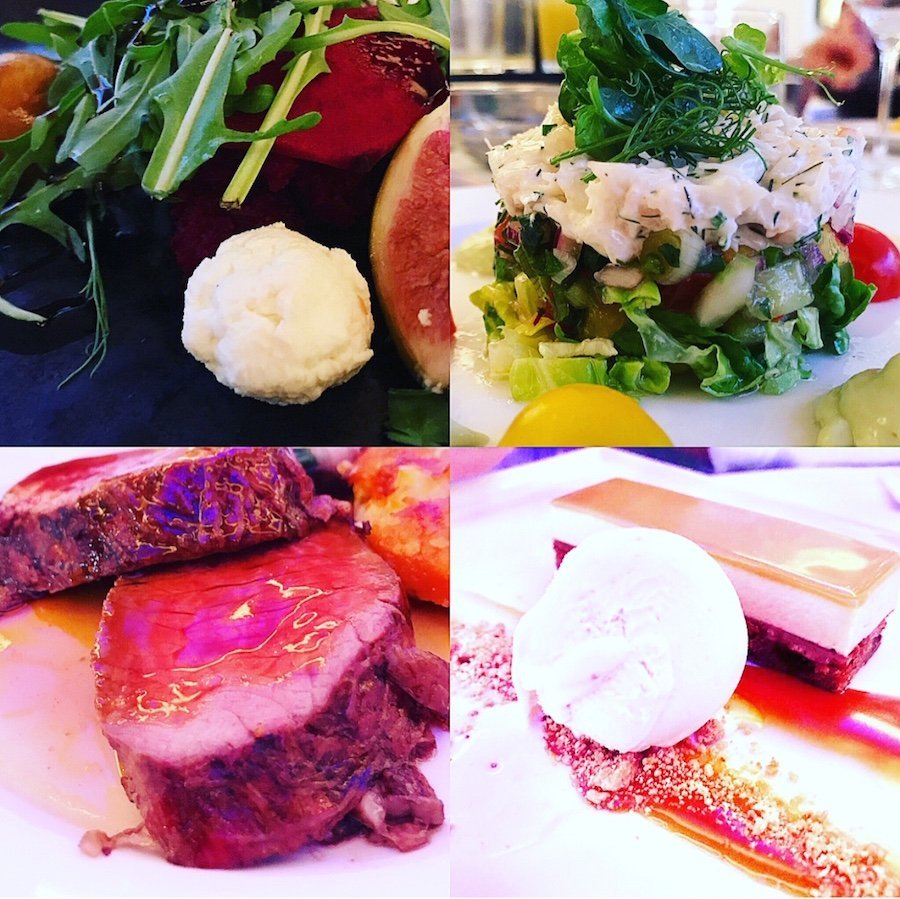 There are also lots of things that families can enjoy together. There are two large swimming pools with no restrictions on swim times, and of course the beach is on your doorstep. With miles of sandy beach and rock pools for kids to explore, a day at the beach is inevitable. Watersports enthusiasts will love the windsurfing, kayaking and sailing lessons provided by the Rosslare Watersports centre during the Summer months. There are also indoor and outdoor tennis courts, boules and a great mini golf course, which we played on a few occasions.  As well as the kids club there is also a large pirate ship playground and a games room for kids to enjoy. 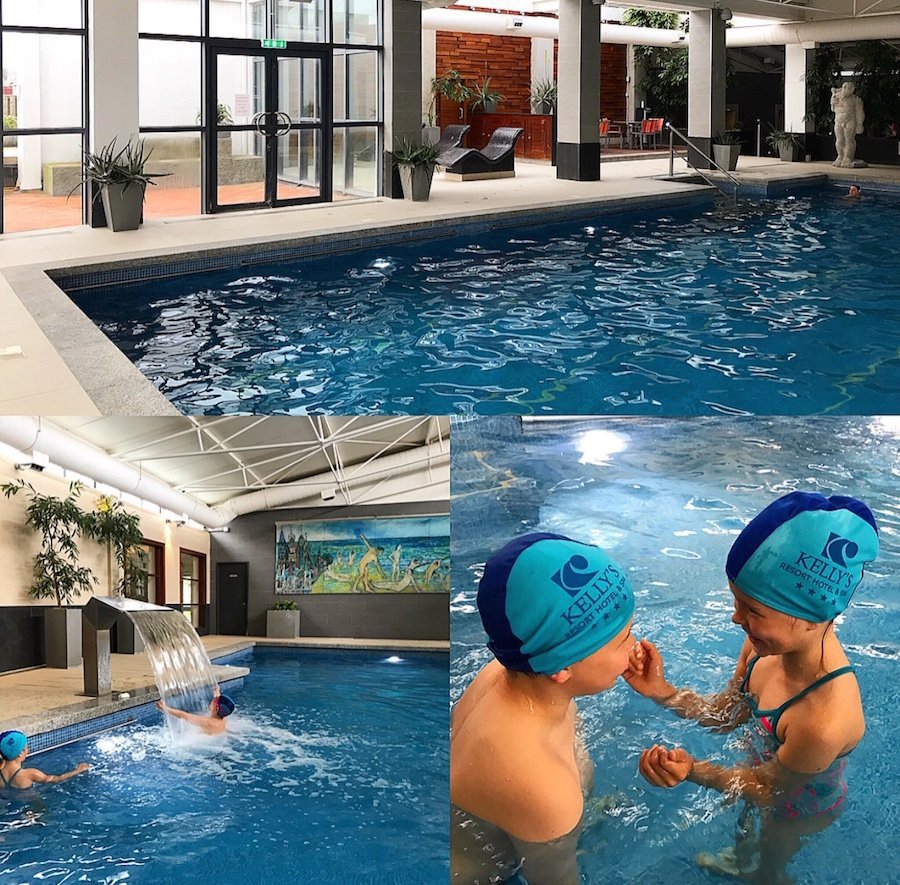 Kelly’s is unique. It is a family-run resort hotel, where parents dress up for dinner while their kids play elsewhere. Kelly’s offers escapism. Kelly’s is located in County Wexford, in Ireland’s sunny South East, which was given the name because Wexford has lower average annual rainfall than any other county in Ireland. Having lunch on the sunny rooftop balcony on our last day we almost forgot where we were. It was like the Mediterranean. With fine beaches on your doorstep, non stop entertainment for kids, mouthwatering food and a wine list to die for, it is not surprising that many believe Kelly’s is the best family hotel in Ireland. Go see for yourself!

For more details visit Kellys.ie  and check out my blog on things to do in Wexford with kids.

I post my weekly travel email every Tuesday with the very best travel deals, destination reviews and travel news.
So if you are planning that holiday, pop your name and email in the boxes below.