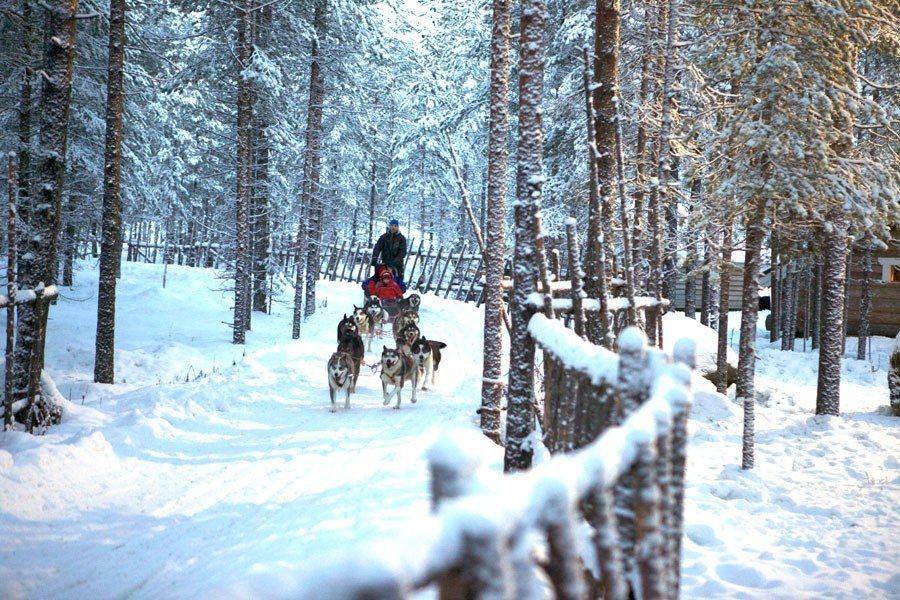 From the moment I told my kids that we were going to Lapland, all they wanted to know was were they going to meet the ‘real’ Santa? I guess it is every child’s dream to meet him and my kids were no exception.

As soon as we arrived at the airport and saw the North Pole on the departures board the excitement was palpable. We were met by the lovely Tinsel Tina, the Sunway representative who gave the kids goodie bags filled with colouring books, crayons, Santa hats and the very much appreciated Cadburys selection boxes. Not that we need any of them, because we received a lovely hot breakfast free of charge on the flight (a rarity these days).  The flight literally ‘flew’ by as we were entertained throughout with Christmas carols and games. We arrived in Lapland within three hours. 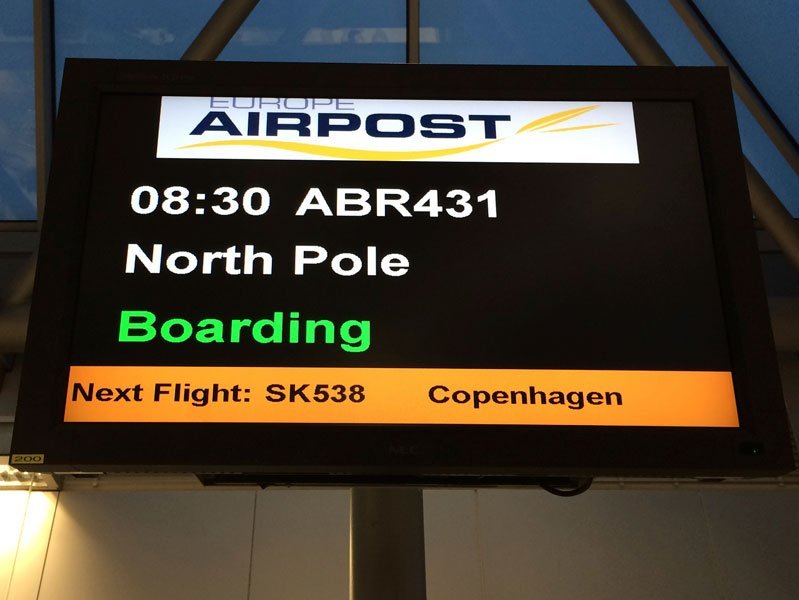 We were whisked away immediately and brought to get our snowsuits and boots for the duration. This was brilliantly organised, we were back on the bus fully loaded with clothing to combat the cold within ten minutes. I was pleasantly surprised by the quality and cleanliness of the clothing. I had purchased snow boots and clothing for my kids beforehand but really there was no need. What was supplied was more than adequate and in retrospect I would have travelled lighter!

We were brought to our accommodation at the foot of the ski slopes which was another welcome surprise. The standard was really high, with a really spacious cabin with all mod cons, including a sauna and most importantly it had underfloor heating! I guess I expected an old cabin where we would have to wear layers in bed but it was the opposite, in fact another place where I could have saved on the packing – no need for the kids ‘onesies’! 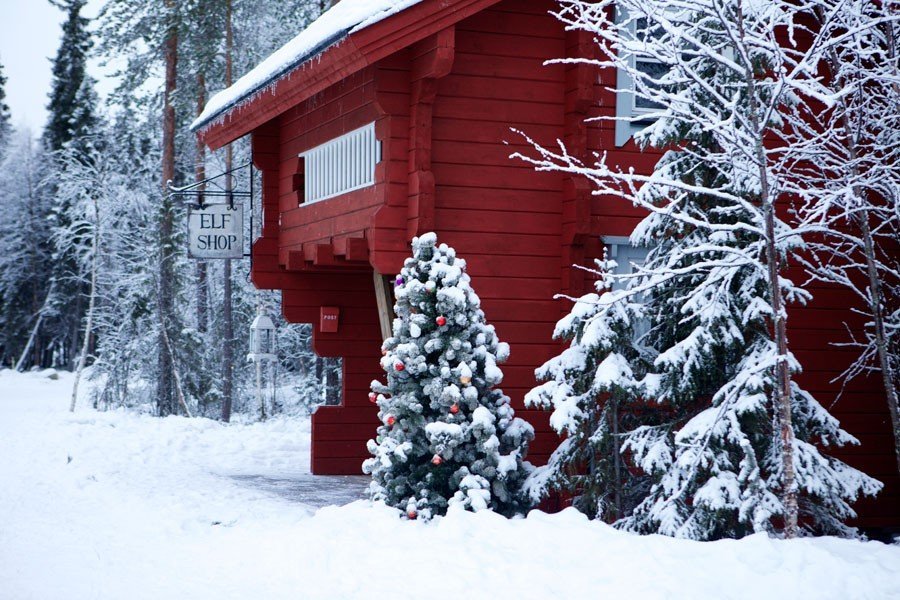 It was then that the adventure began. As the moderate daylight faded, we were brought off in the dark to our our first activity which was snowmobiling. I thought it would be like a theme park ride around a purpose built track. It was the opposite. We were led deep into the snowy forest to meet our experienced guides. We were then given a brief lesson, supplied with helmets and given amazing snowmobiles to ride. It was like a scene straight out of a James Bond movie! 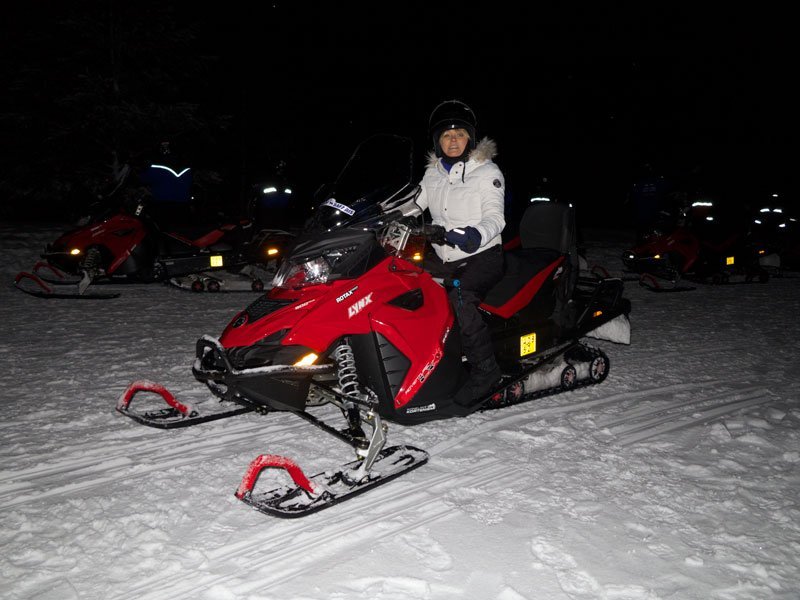 The adults drove the snowmobiles while the kids were pulled behind in traditional sleighs, lined with reindeer hides. It was magical! We drove deeper and deeper into the dark forest for a leisurely thirty minute drive. It was full of Christmas trees covered in snow, it was like a fairytale. Don’t tell anyone, but I think the adults enjoyed it every bit as much as the kids! We had worked up an appetite at that stage so we welcomed the buffet which was laid on in the hotel beside our cabin. It wasn’t exactly Michelin star quality but there were clean plates all around! We had just enough time then to try some tobogganing before bedtime. Each cabin came equipped with kids toboggans and my two kids loved going down the hill beside our cabin, it was great fun. 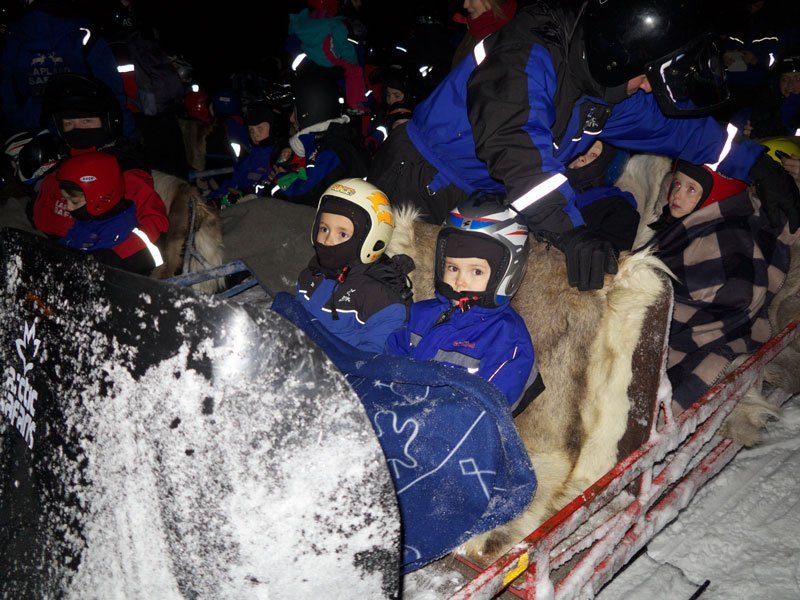 The second day in Lapland was the big one! Our first port of call was a trip to a husky farm, once again very well organised. Half of the group enjoyed a brief chat about huskies while sipping hot berry juice around a cosy fire. We learned about their role at the arctic circle and had the opportunity to meet and pet some eight week old husky puppies. The other half of the group took a ride in the sleigh pulled by eight husky dogs. It meant no one was waiting in line for too long in the freezing temperatures. The dogs were remarkably fast and it was great that all of the family could go together in the same sleigh and that we could get the obligatory family picture.

A short drive later and we were at the reindeer farm. This was another beautiful setting at the edge of the snowy forest. Once again, the group was split in two. A brief chat about reindeers and some more hot berry juice was given while the others took the reindeer rides. They are beautiful creatures, almost mystical, but the ride itself was quite slow and not as exhilarating as the previous two. In fact, there was a huge snow slide at the farm, basically a steep hill covered with ice and I think the kids actually enjoyed sliding down that more than the reindeer ride itself. They did receive a reindeer driving licence afterwards, a nice touch and a lovely souvenir to bring home. 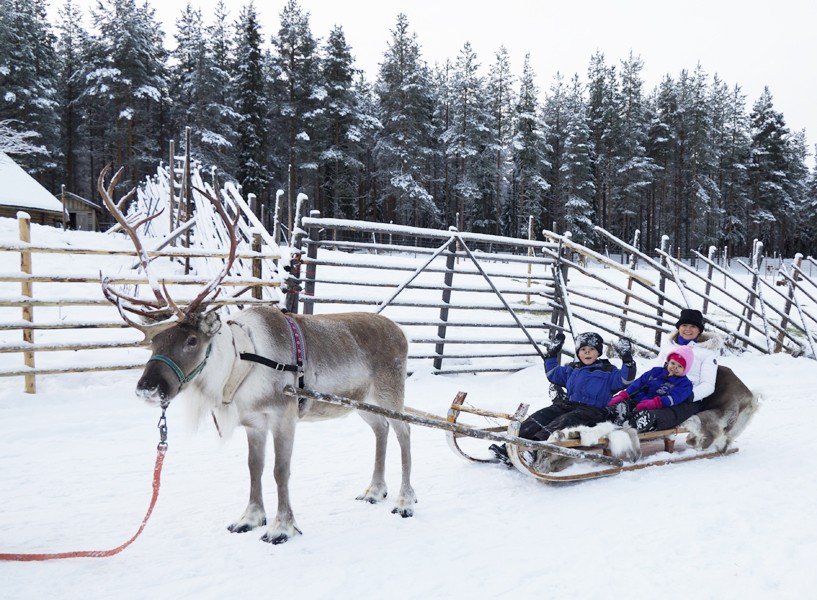 It was then time to go to see the man himself, the excitement was exacerbated by the lovely Elphina, on our coach. Elphina was our honorary elf guide throughout and she made each journey effortless, with plenty of Christmas songs and games being played. We also got to learn a little Finnish too. We arrived then at Joulukka and were warmly greeted by two rather large elves. Complete with pointy noses, beautiful clothes and fantastic accents – they were the real thing! We were brought into their village and had lunch in a beautiful elf cabin made of logs. 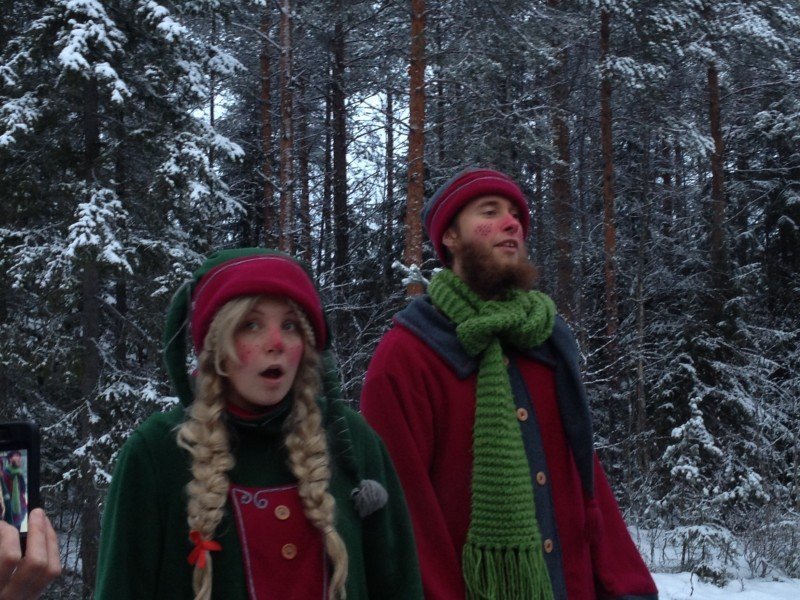 We were served by more elves, all equally as impressive. We then went to see Santa’s secret command centre. It’s hard to come up with words to describe this, suffice to say I believe again! We were shown how Santa receives the letters, how Santa sees the naughty and nice children and where the elves were working underground making all of their presents. One of the elves then asked us to sing a Christmas carol and as my daughter duly obliged, the wall behind us magically disappeared. 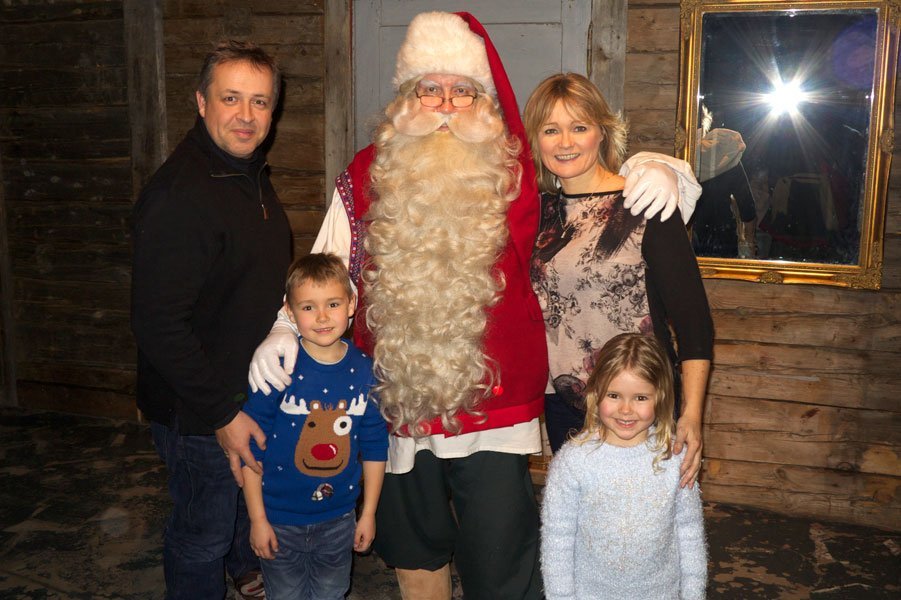 We peeked around the corner and there he was, the answer that has perplexed us all for so many years, Santa was real! His immense size complete with a beard that touched his knees, you could tell there was something different about him, compared to his helpers that you see in other places. He knew Luke and Alex’s names and what they had written in their letters. The expression on their faces is something that I will never forget, it really was priceless.

They came out of the command centre with a lovely toy husky dog from Santa. Somehow I think that toy will be tucked under sleeping arms for many years to come. As I relived the experience with my husband I turned around to see my once sceptical son lying on the ground with his ear to the snow and ice. When asked what he was doing, he said he could hear the elves underground, making toys – it doesn’t get much better than that! 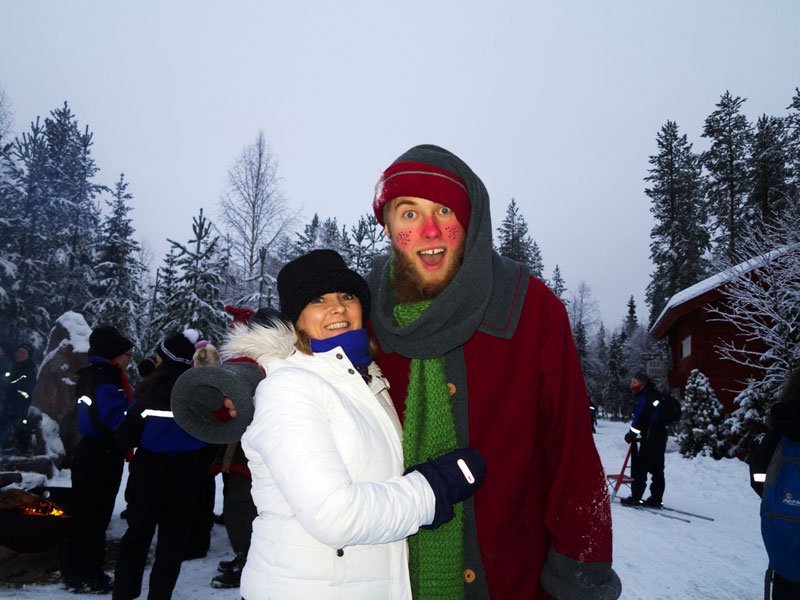 Our day wasn’t over yet! We then went to elf school and learned many tips from how to be kind to others to how to decorate gingerbread cookies. We were allowed bring our iced cookies home to granny, another nice souvenir. It was time to go back to the cabin then for some much needed rest. Although with three hours of free time, you could choose to go tobogganing or in our case build a snowman, a request that was promised to my daughter before we left Ireland.

We were collected again at 7.30pm for a trip to Santa Park. This completed an already fantastic day with a nice meal, a show and another appearance by the man himself. Santa posed for pictures with everyone, which gave you the opportunity to capture another shot in case the earlier one didn’t go as planned. We went on an indoor train ride, made our own elf decoration as well as making a wish by banging three times on the ‘Drum of Dreams’.

The last day had come, and time to say hey hey (goodbye in Finnish) to our beautiful cabin in this winter wonderland. We had a final stop at Santa Village where we sent our postcards complete with Santa’s official stamp to friends and family at home. There was also a chance for some souvenir shopping, (the necessary Christmas decoration from Lapland), and a chance to cross the arctic circle line. There were also two ice slides here so it gave the adults time to souvenir shop or grab a hot chocolate while the kids played on the ice with their new found friends. A quick stop to return the borrowed thermal clothing and off to the airport we went.

As we queued to check in, the honorary elf guides played with the kids, telling stories and singing songs. The entertainment continued on the plane home with Tinsel Tina singing more songs and painting faces after our inflight Christmas dinner. Tina then asked kids to go up to the top of the plane, speak into the microphone and tell everyone about their favourite part of our trip to Lapland. While most kids said meeting Santa, as many said ‘everything’ was their favourite thing. This really summed it up for me because while you initially think the trip is all about meeting Santa and the elves, it’s really not. Lapland is about family time, building a snowman, tobogganing, husky rides, snowmobiling, snowball fights and reindeers. 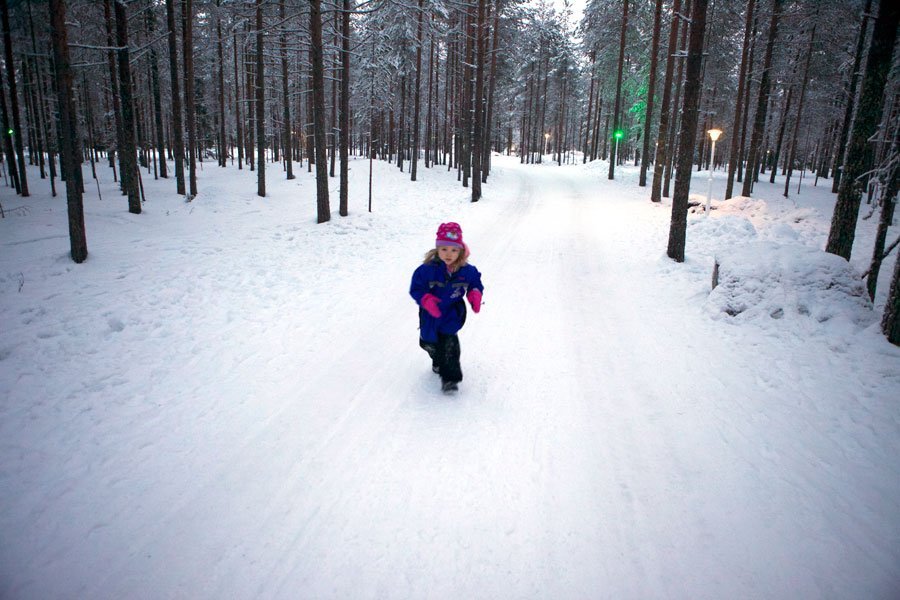 Lapland is a magical place that until now only belonged in fairytales. I couldn’t recommend it highly enough so try to go before its too late. Sure, you could get a two week family sun holiday for the same price and no doubt you will have a good time, but which holiday will have memories that will last with you for a lifetime?

I went on Sunway’s two night sleighbell spectacular trip. Please email me: sarah@thetravelexpert.ie for personal quotations or  Visit Santa in Lapland with Sunway

There is only one thing better than summer in #New