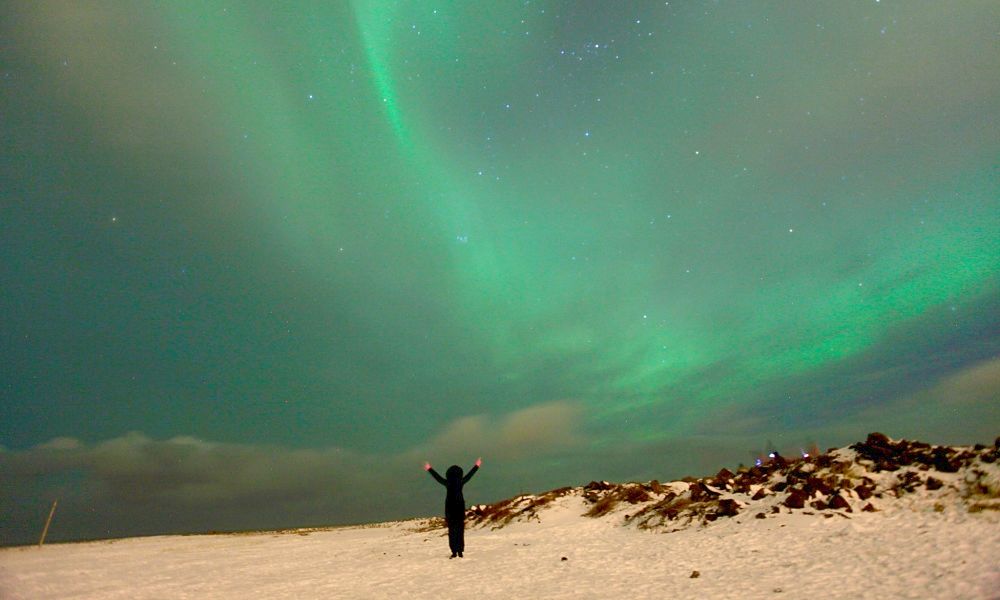 Chase the Northern Lights, swim in the Blue Lagoon and marvel at Gullfoss Waterfall – there are so many things to do in Iceland – here are my favourites.

Icelanders are so proud of their country, and so they should be. You get the feeling you are somewhere pure, with the cleanest air and the purest water, which you can drink straight from the tap. There are so many things to do in Iceland – you can hike the glaciers, discover countless waterfalls, bathe in a geothermal lagoon – even their swimming pools are outdoor!

Driving through the countryside you are constantly awestruck by the landscape. The Icelandic horses in wide open snowy fields, was just one of those awesome moments.

We travelled with direct from Dublin and after a pleasant two hours and fifteen minutes, we landed in Reykjavik. The view from the plane sparked excitement, with blue skies and snow capped mountains, the adventure was about to begin.

The first thing we noticed was that there was a duty free shop in arrivals. People had trolleys full of beer and wine – it was the strangest sight! Apparently most hotel rooms have a fridge in place of a mini bar.

Hotels encourage people to bring alcohol with them to their rooms, as they understand that tourists find the cost of living expensive in Iceland. Needless to say we didn’t want to go against tradition so we bought a bottle of wine (€18) and a six pack of beer €10).

Reykjavik is about a 40 minute drive from the airport, so I would advise you to pre book transfers as it is €25 one way or €39 return for the airport coach and this could make numerous stops before arriving at your hotel.

Where to stay in Iceland

We stayed at the Grand Hotel. Although 20 minutes walk to the centre of Reykjavik, I would highly recommend it. The rooms were modern and spacious, the staff extremely friendly and the buffet breakfast was excellent. The lounge bar has a great food menu and we ate there on two occasions.

They have the usual fish and chips, burgers and pasta options and all are very reasonably priced – well, by Icelandic standards anyway!

They also have a happy hour from 5pm – 7pm each day where drinks are half price. This meant a meal for four with drinks was €100 – not the exorbitant prices we had been warned about before we left.

In general, a pint of beer or glass of wine is €10 and a pizza, pasta, steak sandwich is about €20. Snacks are expensive though so I would recommend bringing some with you, especially if you are planning tours. It was €20 for a Panini at the Blue Lagoon….

Things to do in Iceland – See the Northern Lights

Unfortunately our Northern Lights tour was cancelled on our first evening due to bad weather. We were in Iceland for four nights and tours were cancelled for three of them. The good news is that you can reschedule your tour for another night but if you are only staying a few days, you may find it difficult to get availability. See the top things to do in Iceland with Viator here.

Luckily we had booked with an agent, Obeo Travel, who were excellent. With one phone call, they rearranged our tour for the following evening. Meanwhile there were many disappointed travellers who had come specifically to see the Northern Lights and were going to go home disappointed. I can’t stress how important it was to have someone at the end of the phone to call when tours were cancelled.

TOP TIP: Make sure you book the Northern Lights tour for the beginning of your holiday so you can rearrange if necessary.

Speaking of the Northern Lights… we saw them!! We were so lucky as there was only one night available for us. We took the coach tour and I would highly recommend it. Many opt for the boat tour but if you have rough seas, which is common in wintertime, it could get messy…

We ‘hunted’ the Northern Lights, even the driver didn’t know where we were going when we boarded the bus. There was a snow storm and visibility was poor so I must confess I was not very optimistic. After an hours drive, we arrived at what seemed like the middle of the country, although I have no idea where exactly we were.

We parked along with two other coaches and off we went. We wandered far enough into the fields to get the best photo opportunity and waited patiently. The kids were happily building snowmen when all of a sudden they appeared. Initially they were quite faint but just as we thought the spectacle was over, out came the aurora borealis again. The second time they danced through the night sky.

It was all a bit surreal, it was midnight and we were buzzing, I genuinely didn’t expect to see them. It was a great experience and another one ticked off the bucket list!

TOP TIP: Make sure you bring a tripod and a good camera capable of long exposures to get clear pictures.

We saw the #northernlights 😍😍😍 They were amazing, can’t believe we saw them, there has been terrible snow storms and our tours have been cancelled so we were SO lucky last night as that was our only chance!

Things to do in Iceland – The Blue Lagoon

A similar experience happened when we got to the Blue Lagoon. There were snow showers all morning so I was beginning to think the 40 minute drive from Reykjavik was going to be a waste of time.

I remembered Ziggy’s advice ‘go inside have a cup of coffee and come back out again’. It was incredible, we arrived at the Blue Lagoon and the sun came out! We had a magical experience bathing in the roasting hot baths with snow all around us. The kids loved it too, and even bought a non alcoholic cocktail at the swim up bar!

We stayed there for hours and only that we had planned to drive to Gullfoss Waterfall afterwards, we would have stayed even longer! Although you book an allotted time, once you are there you can stay in as long as you like. Like everything in Iceland, it is extremely well organised.

I have a dedicated blog post for tips on visiting the Blue Lagoon, which is one of the top things to do in Iceland, check that out before you visit.

Chillin’ at the #bluelagoon #iceland #love 😍 Who would have thought they had massive snowstorms a few hours after this shot was taken.

Things to do in Iceland – The Golden Circle Tour

While we had two magical experiences, unfortunately the weather (the worst snow storms since 1932) hampered the rest of our visit. Rough seas, sick tummies and no whales meant our whale watching trip was a disaster.

We drove the Golden Circle but only heard Gullfoss waterfall – seeing it was impossible. We did manage to get to see the famous Strokkur Geysir, which duly erupted for us, in fact it does so every few minutes, so regardless of weather, you are guaranteed to see it!

“If the weather is bad, Icelanders go inside, have a cup of coffee and come back out again”. Just one of the memorable quotes from Ziggy our driver! 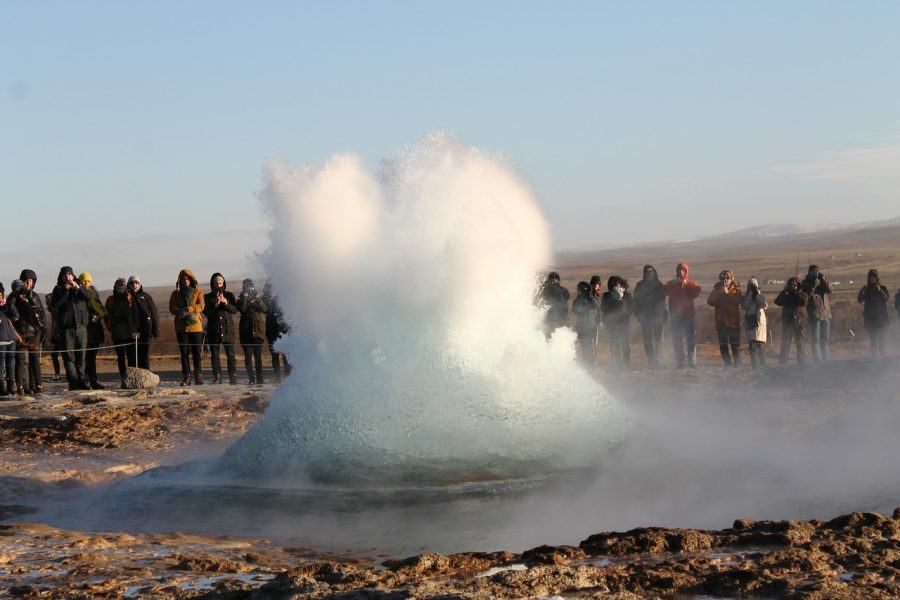 Things to do in Iceland – Reykjavik

We ventured into Reykjavik one evening and ate in a lovely Italian restaurant, Italia. Pizzas and pastas were great and not ridiculously expensive either. We had a quick roam around the city which I instantly liked, but unfortunately time was against us.

One noticeable difference I found compared to other capital cities was the lack of tourist traps. As the majority of people are visiting Iceland to see the sights, the scenery and the culture, there is not the typical tacky tourist trails on show.

The city had an authentic vibe to it and I wished I could have explored it some more. We did have time for a quick walk around it’s famous church and then a pit stop for home made ice cream in Eldur & Is – honestly it was the best ice cream I have ever had! 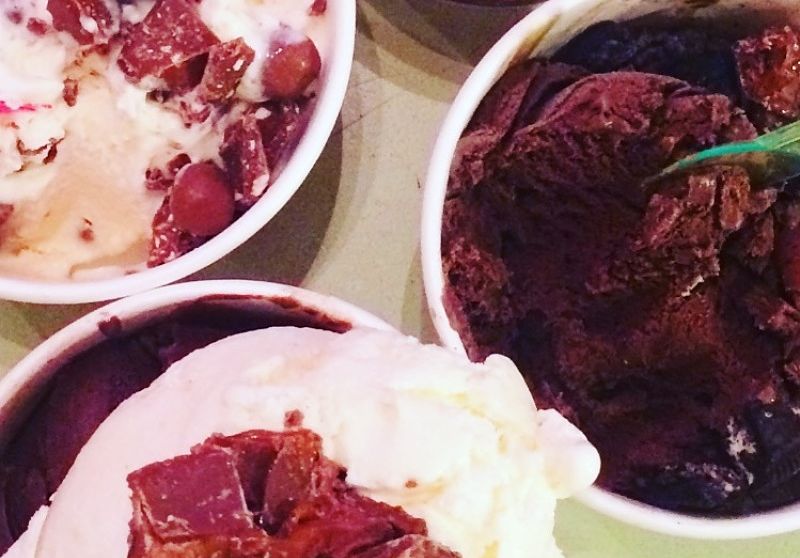 Icelanders have coped with a devastating financial crisis, numerous volcanic eruptions and a colossal influx of tourists. Tourism is now their number one industry and there is virtually no unemployment.

Icelanders appear to adapt well to any change in circumstance and their happy, positive attitude is palpable. There were lots of coaches hunting the Northern Lights and touring the Golden Circle, yet I have seen longer queues to get into the NEXT sale. Considering Iceland’s tiny population of only 330,000 people, it is extraordinary how everything runs so smoothly.

There is something remarkable about Iceland and it is definitely a country I want to go back to. There are so many things to do in Iceland. I want to do a glacier hike, go husky sledding and see Gullfoss Waterfall (again) with a rainbow over it next time! I also want to visit in the summer time when you have 24 hours daylight, a unique experience I am sure.

Iceland I will definitely be back…

Sarah Slattery6 years ago
How Long Does It Take To Get A Passport?
Top 10 Reasons to Visit PortAventura World