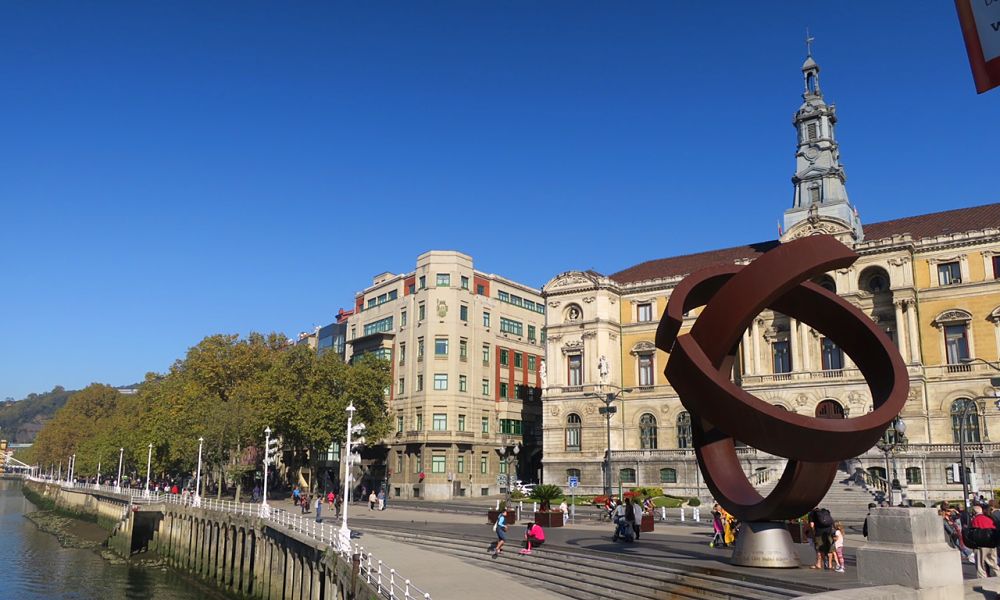 For many, the main reason for visiting Bilbao was the Guggenheim. But when you are travelling with two small kids, an art museum, albeit one of the best in the world, is not high on the priority list.  Luckily we discovered lots more highlights during 48 hours in Bilbao.

I always wanted to visit the Basque Country but as there was so much to see, I decided to plan a road trip. Bilbao was our first port of call. We only had 48 hours in Bilbao and decided not to frantically scratch the ‘the top ten things to do’ off a list. Instead we explored Bilbao at a leisurely pace, immersed ourselves in it’s culture and found a city that offers so much more than the world’s most impressive art museum.

We stayed at the modern Holiday Inn Bilbao. We had two rooms with a large living area outside, which was particularly handy with the kids. The hotel has a swimming pool, spa and leisure centre and a nice bar with a pool table. It was just what we needed, plenty of space and good facilities. It is located about 15 minutes walk to the old town, which we walked each day.

The #oldtown of #Bilbao was buzzing last night. First impressions are great. Off out to do some more exploring now. #basquecountry #Spain #ilovespain #ineedspain #travel #travelblogger @bilbaotourism @spaininireland @beautifuldestinations

Walking down to the old town I realised I was going to like this city.  It was almost medieval, there were colourful buildings, narrow alleyways and pintxos bars (the Basque’s take on tapas) everywhere. After descending some 300 steps, we were greeted by a buzzing crowd in a large square. The atmosphere was tangible. Locals and tourists spilled out of pintxos bars. High street stores in old buildings were next to local crafts shops and pintxos bars. We strolled around the side streets and soaked up the atmosphere, before enjoying our first taste of Bilbao’s cuisine.

The Basque country in general is known for it’s culinary delights and Bilbao is no exception. Pintxos bars are on every street corner, Michelin star restaurants are plentiful and if you are unsure what to try, you can always book one of the city’s popular food tours. I loved eating pintxos and there was a huge variety to choose from. I have eaten tapas in many Spanish cities but I have never seen such variety before. Traditionally pinxtos or pinchos were small portions of food, with a cocktail stick pierced through them. This is no longer the case, pintxos can be anything from Iberian ham to risotto, small portions of food that Basque people have at any time during the day, usually accompanied by a glass of wine  🙂

After a great first night in the old town we decided to go ‘modern’ the next day and head for the Guggenheim. Bilbao is very easy to navigate and although we walked everywhere, there are trams, metro and buses too. We decided to walk along the river and admire the architecture that Bilbao is renowned for. We spotted people kayaking along the river. This struck me as a novel way to see the city, I began to wish we had more time…

After a leisurely stroll we arrived at the Guggenheim. Even if you have no interest in art or architecture – you can’t help but be blown away by the sleek modern design. Frank Gehry, the architect who designed it, deserves all the praise he gets. The titanium panels reflect the lights of the city and ensure that the Guggenheim looks different depending on what time of the day you are there. The enormous sculptures outside are remarkable too, it is impossible not to be impressed, even before you step inside.

Sculptures dominate the 1st floor as well as cool digital displays, so these kept the kids happy for a while! For art lovers the Francis Bacon exhibition is outstanding, unfortunately I did not get to see much more. It’s not the most child friendly museum I’ve been to, my kids were scolded on more than one occasion by a burly security guard! If you are travelling with children, don’t plan to stay for the day! 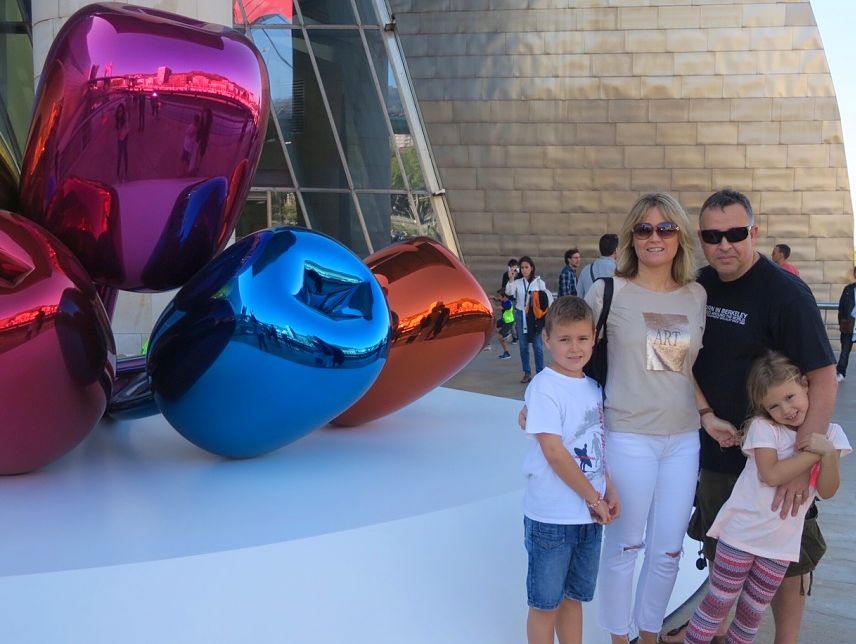 Tummies were rumbling after our morning’s sightseeing so we decided to try more pintxos! Time to visit the Plaza Neuva. This magnificent square dates back to 1821 and between the colonnade and the arches there are tons of pintxos bars. We sat outside with the locals, had wine and pintxos and enjoyed the Spanish way of life.  There was plenty of options for kids as well as unusual combinations like, goats cheese, onion jam and chocolate! Each one was better than the next, I could have sat there all day. 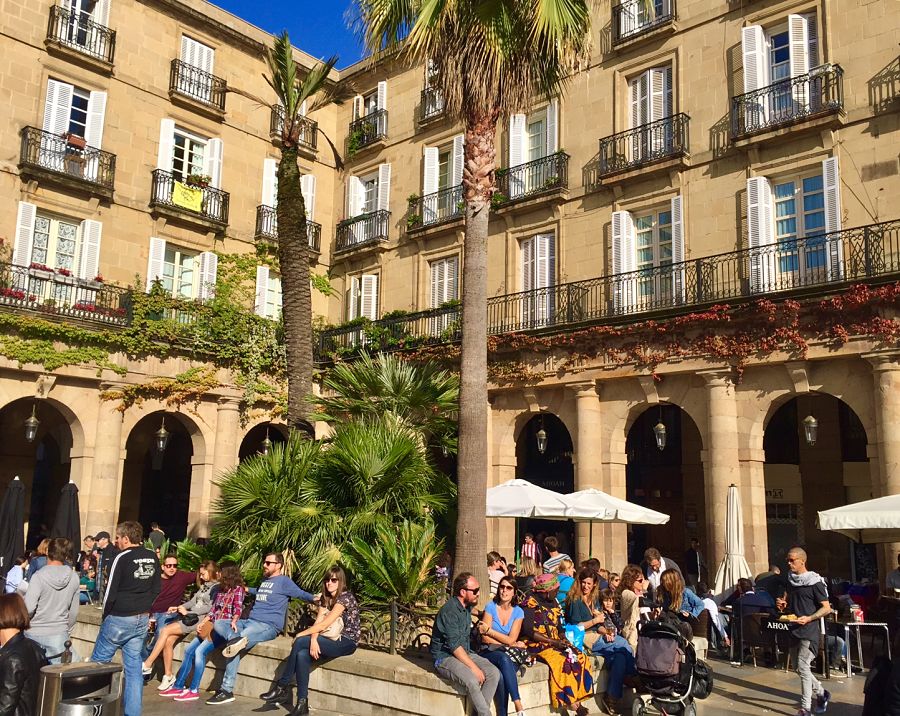 We continued our stroll around the city, admiring the shops on the Gran Via, before taking the three minute funicular ride to Mount Artxanda, which offers the best views of the city. A mist descended while we were there but on a clear day it is worth a visit and it only costs €2! Bilbao is very inexpensive. A glass of wine Is €1 – €2, taxis and entrance fees are lower than many of its European counterparts and dining out is fantastic value.

We had sampled many pintxos at this stage so our last night we fancied a leisurely meal with a full menu. This, however, is not easy to find in Bilbao. Perhaps the fact that it was November and many places were closed, but we struggled to find a restaurant open that had a full menu. Our hotel recommended Columbo, a modern fusion brasserie which served everything from cheese burgers to Pad Thai – just what we needed! 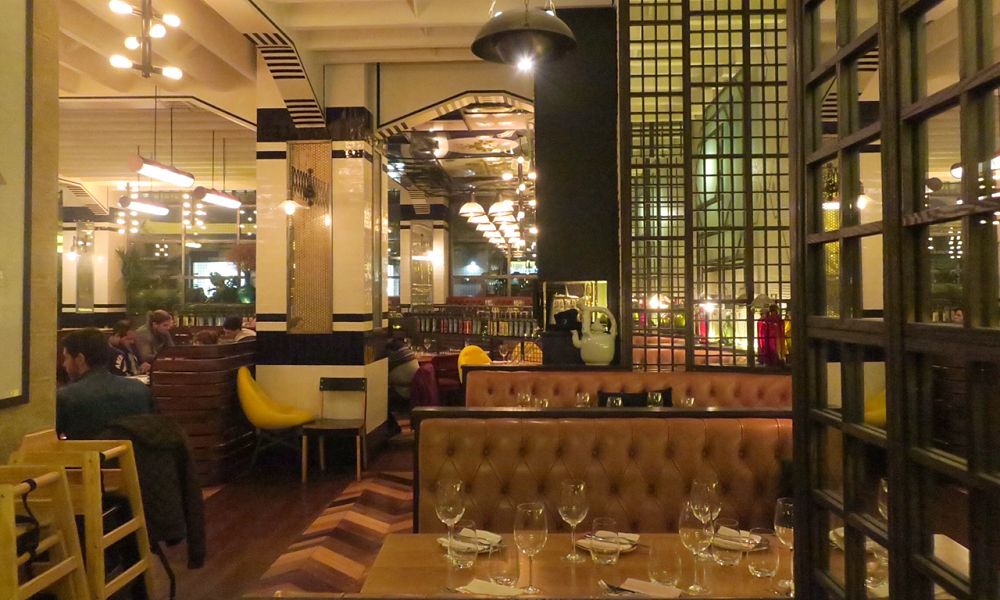 We collected our rental car the next day and decided to take a quick look at the surrounding countryside. Bilbao is so close to the coast and there are some excellent beaches near by. You can reach these easily by metro, so car hire is not necessary. The countryside resembled an Austrian ski resort, with Tyrolean houses and wafts of freshly chopped wood emanating from the deep forests.  We went in search of San Juan de Gaztelugatxe, a legendary chapel that stands on a peninsula jutting out into the sea.

This magical place was once a convent of the Knights Templar and was recently a setting for the TV series, The Game of Thrones.  We planned to drive past and stop to admire the view but after a quick search on tripadvisor, I discovered that it was only a 30 minute walk. My eyes should have told me that this was impossible but having read four different reviews that said the same thing, I persuaded my husband and the children that it would be worth the trek.

It was only after the 40 minute walk to reach the bridge that we realised that this wasn’t included in the reviewers comments… Three hours later we arrived back at the car, sore, thirsty but proud of our achievement all the same. The views are spectacular and definitely worth the trip, but be prepared. Bring water, snacks, comfortable shoes and take three to four hours to experience it properly.

And so ended our 48 hours in Bilbao, an unsung hero of the Basque country, full of culture and charm, I will definitely be back for a longer visit next time. 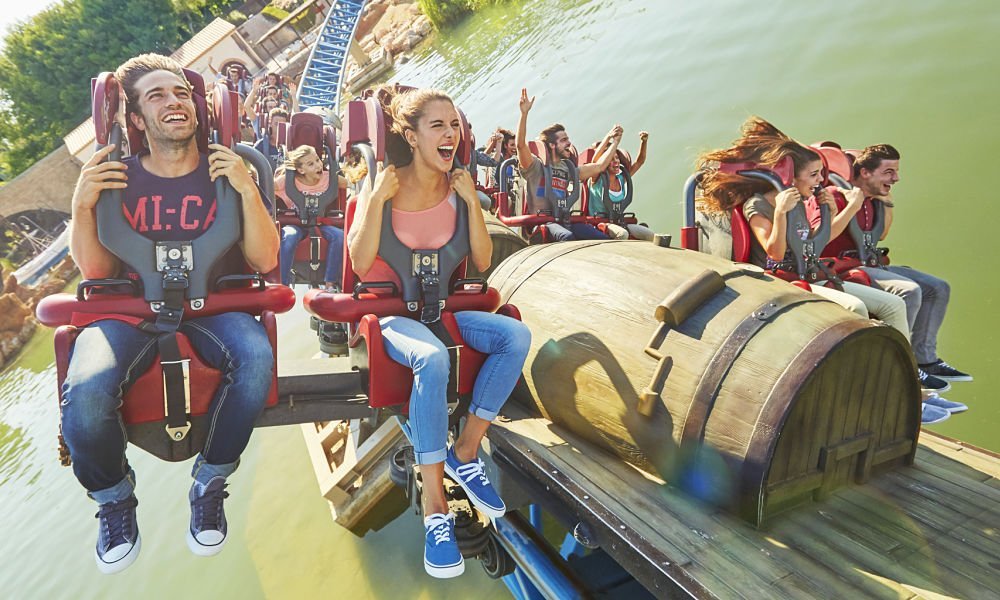 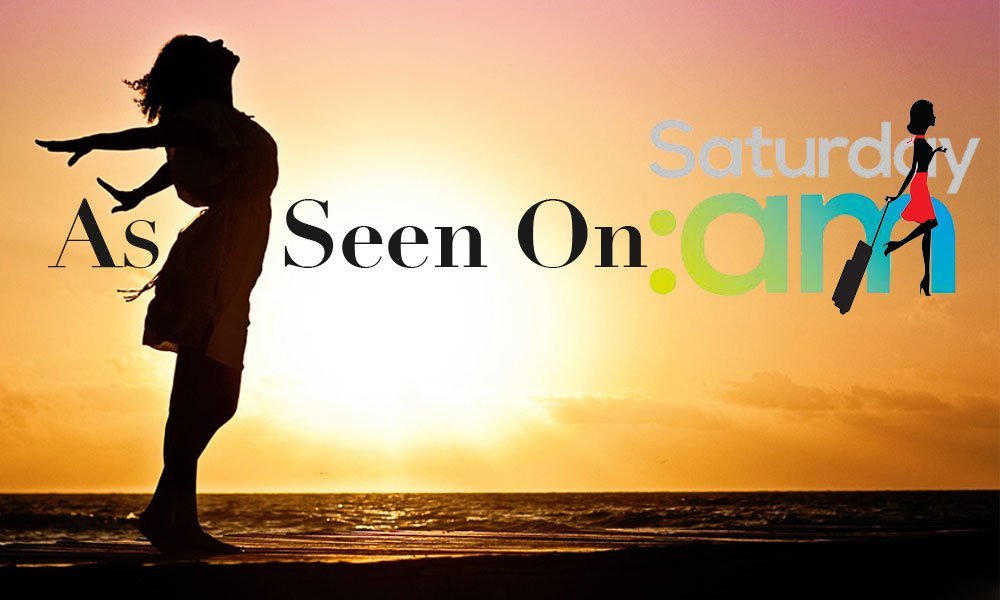 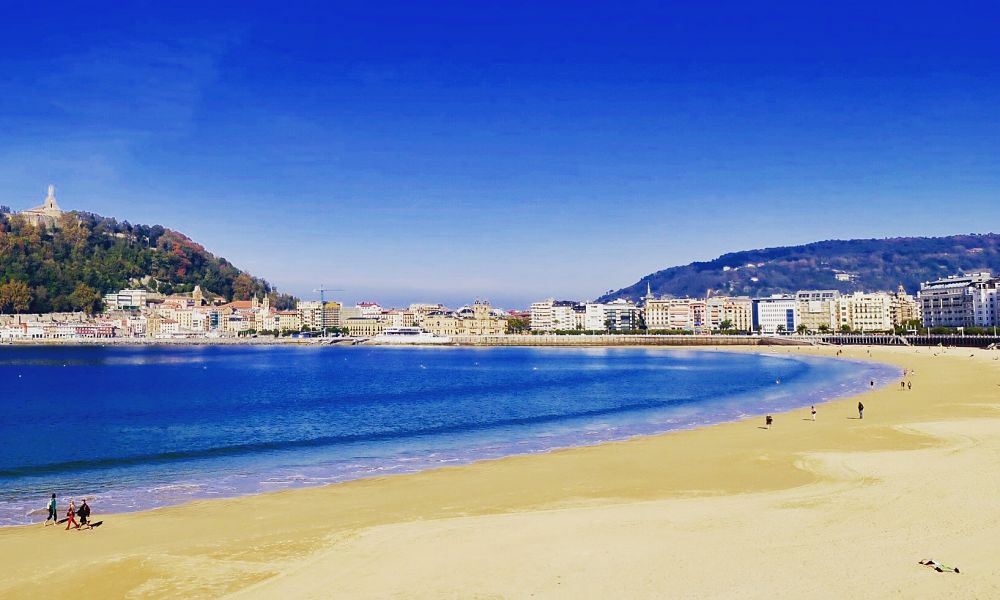 A Short Break in San Sebastian 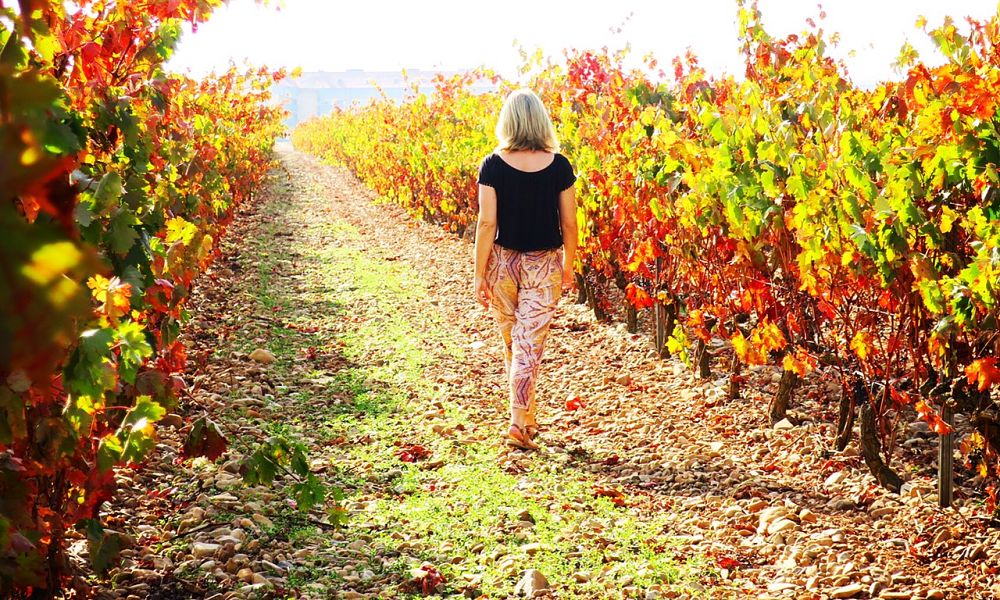 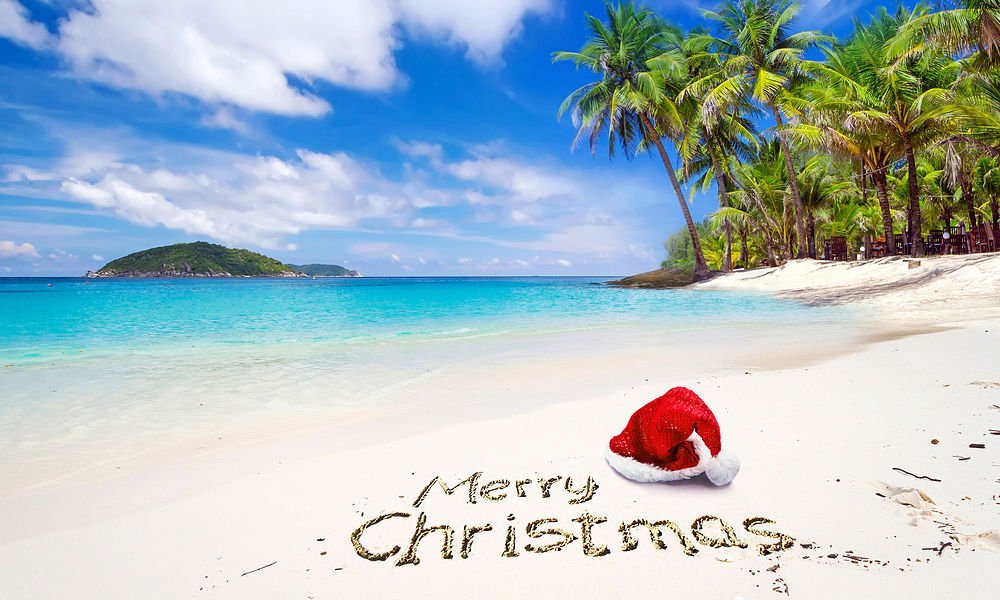 In my element here, can’t you tell 😂 My first

Hola from Castilla y León 🍷 I’m on an amazin

I’m back on my travels tomorrow ✈️ Feeling v

Help a girl out 🙏 I’m getting loads of enquir

Not the best idea to go climbing here without shoe

Home after a fabulous few days in Alvor - just lov